Hiking up Helvellyn: A trip to the Lake District 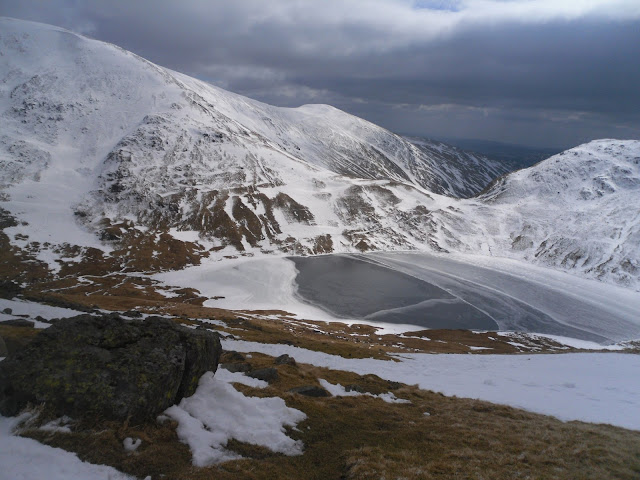 My eyes scan the small, electronic screens after I board coach 'C'. I'm sat at seat 23, next to a lady reading articles on her Macbook. The train flys through the countryside, stopping at a mere six stations before drawing into Oxhenholme, in southern Lake District. I delve into re-reading 'The Hunger Games' for the 4th time, after a year 7 boy refuelled my passion for the series by talking about it endlessly to me.

Together Nathan and I board a connecting train to Windermere. Our train journey takes us across hills, rural farms and snow capped mountains, straight into the heart of the Lake District. We converse of potential treks we want to do and reminiscence of our previous hikes in Edale, summer 2012.

On disembarkment, we're greeted by the sight of a large group of predominantly Asian tourists, fashionably dressed and cladding designer rolling suitcases. I couldn't help but wonder about the practicality of it all, in the rurality of the Lakes.

At the bus stop, we ask about departure times to Patterdale, where our youth hostel is situated. "There are no buses, they don't run in the school holidays!" said the ticket seller...
Don't worry, I'm sure there are other alternatives. We ask a taxi. "£28.00" (ridiculously priced). We wait for other people. Maybe we can hitch a lift and offer petrol money? No luck.

We go back to the conductor: "How far is it?" "Can we walk?". "It's long! At least yer get yer walking boots on, or you can hitchhike, I thumbed it a few times when I was a young-un".

We set off, in quiet optimism. Hugging the roadside where there was no pavement up the Kirkstone pass. Hours into walking, we take in the scenic views as we get higher and higher. My rucksack, at approximately 10kg, starts to dig into my shoulder blades. Four hours into walking, my knees start to throb in protest of carrying excess weight.
My motivation for walking quickly diminished as darkness gradually settled in. Our attempts at hitchhiking remained fruitless and unsuccessful. We dragged our feet up towards Patterdale, without wanting to 'give-in' and order a taxi. 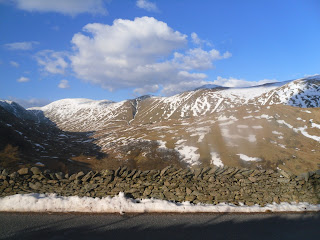 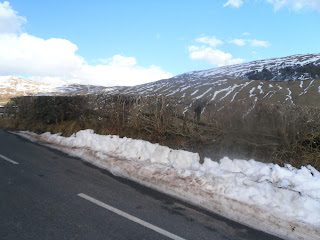 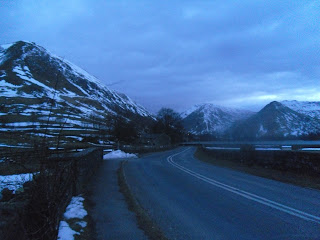 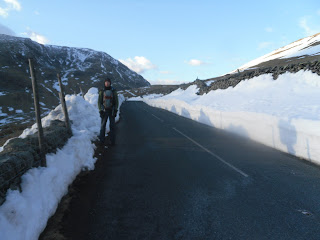 Six hours later, at 9:00pm, we reach our youth hostel in a state of exhaustion. We passed mountains, deer, wildlife, and the highest pub in England. We saved £28.00. We walked 12 miles in the stubborn pursuit of "keeping it cheap". Despite the exhaustion, I was happy. We managed to see and take in more of the Lake District then I ever anticipated on the first day. I was reminded of a motto Matt, Emerson and I devised during our roadtrip: "Do it and It'll be Good".

Starting off the day with a sachet of rice porridge and banana cake, we proceed to ask the receptionist about the conditions for ascending Helvellyn. He advised: "No, don't do it without the equipment. It's in full winter conditions, you'll need crampons and an ice axe.
On the first instance, I felt crushed. There was nothing more I wanted to do then ascend a high mountain during my time in the Lakes.
Nathan and I exchange a side-glance. We pull out the map and plan an alternative route up to Helvellyn without the involvement of thin arete ridges. Lets do it. Lets try, How do we know we can't do it without trying?

With that, I packed a daypack with extra clothing, food and water and we set off on our attempt to ascend Helvellyn against the advise of others.

The first three hours of the trek were breathtakingly beautiful. We passed Grismere Tarn, frozen due to the adverse weather conditions, bright white hills and highlands immersed within the winter snow. 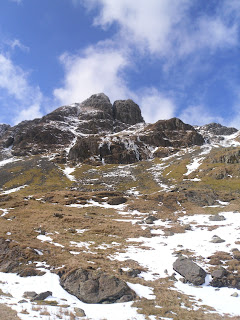 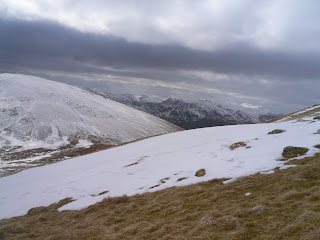 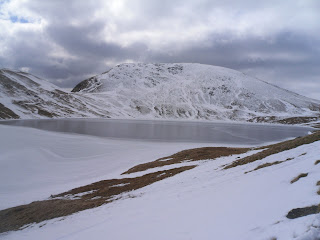 Towards the middle of the trek, the weather conditions intensified. The couple behind us turned back as the wind raged through clothing. The snow got deeper and the effort of treading through the thick snow combined with the steep ascent zapped at my energy levels relentlessly. I felt the need to stop every ten minutes. At this point, I was unsure if we would make it up to Helvellyn.

We soon sheltered behind a high pile of rocks, providing us with temporary relief from the wind that had already blown us off our feet on several occasions. We continued on despite the biting wind, motivated by the sight of a small group of hikers making their way down. If they could do it, so we could we.
We asked a hiker about the conditions at the top. In reply, he said that it was ok, just very windy and slippery in places.

We emerged over the hill at 884M at Nethermost Pike.  Already this felt incredibly high. We saw a small aircraft flying around 300M below us, reaffirming our position at the topmost peaks of the Lake District.
Helvellyn, according to the map, was a mile ahead. We walked across the peak of Nethermost Pike, staying far away from the edge in order to avoid snow cornices and sudden gusts of wind that had the power to unbalance us.
We trudged on, pulling our feet out of the deep footprints we established. With a short final ascent, in the distance we saw a thin pillar of stones marking the top of Helvellyn (950M). We felt a massive sense of achievement, having made it up to the peak when others deemed it not possible. 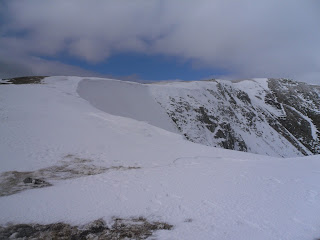 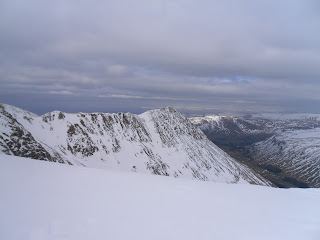 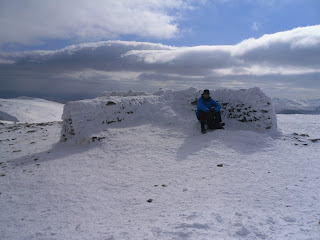 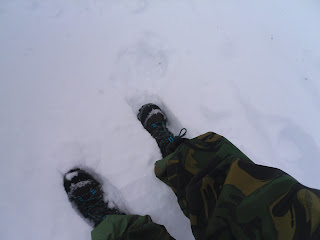 We stayed as long as we could bare in the sub-zero temperatures. We sat looking out at Striding and Swirral Edge, both deeply covered in snow.


Our long descent started on 'Red Scree': Steep, snowy and slippery. Nathan managed to scurry down in quick, light side steps. I attempted to 'penguin step' down the ramp, however I quickly realised that this method was safe, yet very slow and inefficient. I changed tactics and sat down instead: sliding down the ramp-like path and using my feet as the brake and accelerator.

The descent was icy and slippery, but manageable. We ended up descending into Glenridding, a town about a mile away from our hostel. We defrosted with hot drinks at a local pub and went straight back to our hostel for the evening after a 8+ hour day.
It was heavenly being back, where we spent the evening recuperating from our hike. With the adrenaline long gone, my knees ached and throbbed horribly, building upon the soreness of yesterday. I never experienced knee pain before, so I found it quite unusual that they hurt so bad. We relaxed for the evening: cooking dinner and chatting to other backpackers staying at the hostel.

With retiring to bed, I was faced with  one final obstacle: mounting the top bunk without rousing Christen, the Canadian girl who slept beneath me. With tearing pain in both my knees, I gritted my teeth climbing the first rung of the ladder. Mid-way up, I attempted to propel myself onto the bed without the use of my knees, shaking the bed vigorously without intent. Oooops, so much for attempting to be graceful :\.

I woke up to just a dull pain in my knees, ready to embrace my last full day at the lakes. We decide to embark on a light 9 mile walk to "Aera Force", Lake District's most famous waterfall.
It was a bright and clear day. White topped mountains, like ice-cream cones, reflected across the Ullswater lake, creating a sense of tranquility and peace. 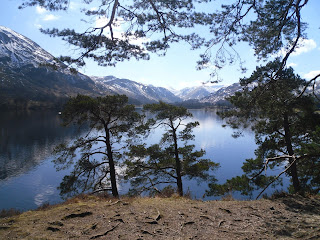 We walked along the pebbled edge of the lake where we could, trudging through shallow water where the path ended. We passed a groom and bride on the way to the attraction, as they stood by the waters getting their wedding photography taken. We arrived at the attraction to a bustling car park and scrums of families.

Although described as the best waterfall in the Lakes, the sight was a little anti-climatic. It was comparable to a large spout of water, dropping ten metres below. The site was described as the area where William Wentworth first met the love of his life. 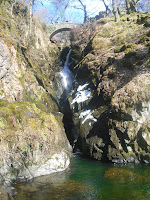 We kept the day gently-paced and embraced the sight of the mountains from afar. Our day came to an end with dinner and a fast-paced card game of 'Dutch Blitz' with Christen, Nathan and I.

I awoke to the rustling of other fellow backpackers. 5 - 6 land rovers, mini-vans and Jeeps were parked stationary outside of the dormitory, awaiting to transport us to Northern Uganda in pursuit of seeing 'The Big Five', exploring waterfalls and scouting through National parks.

There were seven of us and my group consisted of a mother and daughter from the UK, a German couple, two Irish friends and myself. We boarded the minivan with our driver/guide, Hussain, in anticipation of our journey ahead. 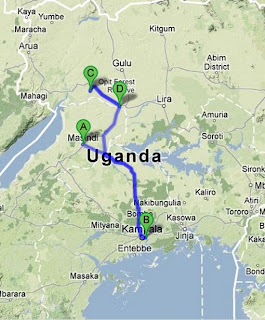 We drove 3 hours up to Masindi in central Uganda, where we stopped off for refreshments. I brought a large avocado, a fruit that is prevalently grown in the country, and two chapattis.

We drove on and as we got closer, I saw impromptu road signs, directing us to Murchison Falls. We soon turned into a carpark, where I could hear the roar of the water in the background and the sight of a river with light tufts of foam floating through.

The first thing that struck me as different was the heat. I squinted in the sunlight, as we made our way to a large concrete bandstand. Our group sat having lunch, where the bandstand shielded us from the sun and the open plan design provided us with a panoramic view of the river amongst green hills.


Our group soon set off with a guide at hand. I noticed the ground glittering with small silver rocks. It was explained that the ground shone as a result of the minerals in the area. After a light ten minute stroll, the day proceeded with some of the most beautiful waterfall sites I'd ever seen. 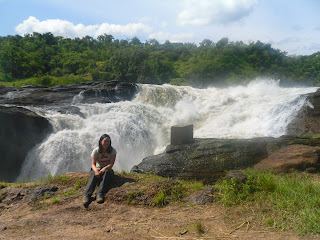 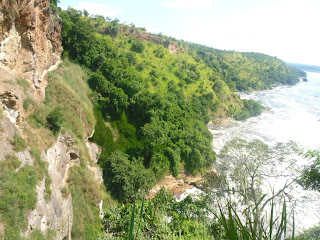 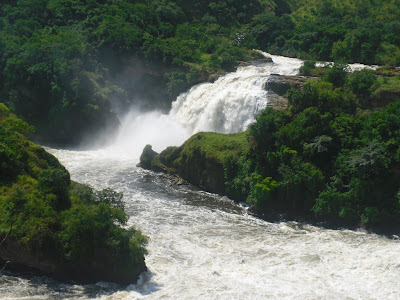 After our walking tour, we drove straight to 'Red Chilli' rest camp, a campsite situated within the National Park. Warthogs wondered freely around the area, a large, open fire burned a night and a characteristic, open circular bar buzzed with travellers. 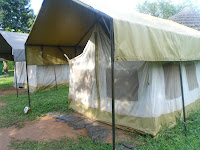 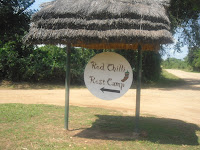 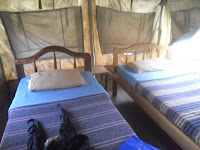 Mid-way through our safari, a bright coloured red bird flew straight into our windscreen. We weren't driving very quickly, probably around 30mph. My window was open and one of it's feathers dropped straight onto my lap. Although it flew away straight after, I did feel bad for the poor thing.

We wrapped up the day with a return to Red Chilli campsite in the early evening, highly anticipating the boat trip up the River Nile to the foot of Murchison Falls the next day.

I boarded a boat called "African Queen". We meandered  up the River Nile, encountering crocodiles, elephants, water buffalos and tropical birds. Large tufts of foam floated through the river as a result of the waterfall.

The boat stopped  around forty metres away from the waterfall. The tour guide announced that it would be dangerous to drift closer, due to the power of the water channeling through the narrow rocks. Before we left, we were given the opportunity to climb out of the boat onto rocks in the middle of the river for photos. 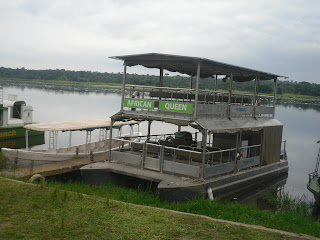 It had been an incredible two days. The African safari that seemed so distant. The  speculative experience that derives from imagination, media and books. I was able to pin a reality to the African safari experience I've always dreamt of.
And yes, there are real giraffes outside of zoos and elephants still roam freely. I experienced just a snapshot of the national parks of Africa and I wish for conservation to be everlasting.


I'll close this entry with my trip tips and a typical, yet classic scene from Disney's The Lion King.

Posted by Thidara at 7:57 pm No comments: