She can’t see me! I thought gleefully. I was 10 years old and I was in a Maths lesson. My eyes were lowered to Harry Potter and the Philosopher’s Stone. The book was nestled under the table in my lap and I was transported away from a long drawn Maths lesson to a new world of wizardry, Hogwarts and Quidditch. I was absorbed into a new and vibrant world within my mind’s eye and out of a London comprehensive school. Secretly reading in a Maths lesson? I was later told off and given a yellow stamp in my diary for my misendeavours.
I'm a 90's kid and I feel that the Harry Potter series has been a massive part of my childhood. Over a decade later, and I still have an unshakable passion for the books. I trembled with fear as I read the Deathly Hallows and I felt utterly crushed at the death of Sirius Black. This blogpost will cover my visit to the Warner Bros Harry Potter Studios and the free self-guided Harry Potter London walking tour that I took with a friend around London. 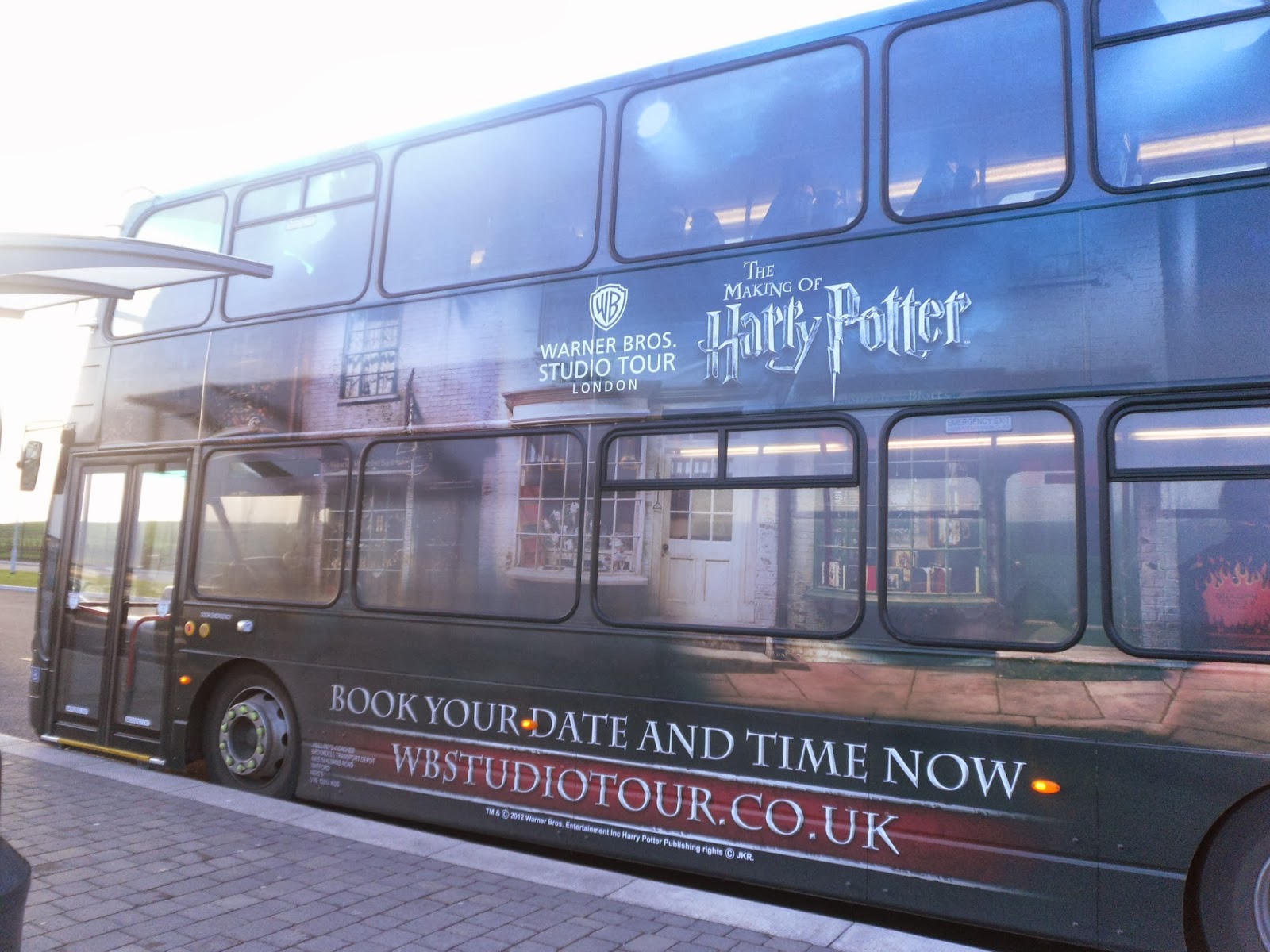 I was clouded with doubt. How could they franchise such a wonderful book series? £29.00 to see props? Really? Regardless of my doubts, I couldn't contain my curiosity for visiting the venue. We booked a time for our tour online and the transport links to the venue were quick and convenient from London. My oyster fare from London Euston to Watford Junction was £2.00 and a return bus fare directly to the venue was £3.00.
The building was incredibly grand on first impression.
We marvelled at the life sized chess pieces and chuckled at the overly large portrait of Draco Malfoy in the foyer. 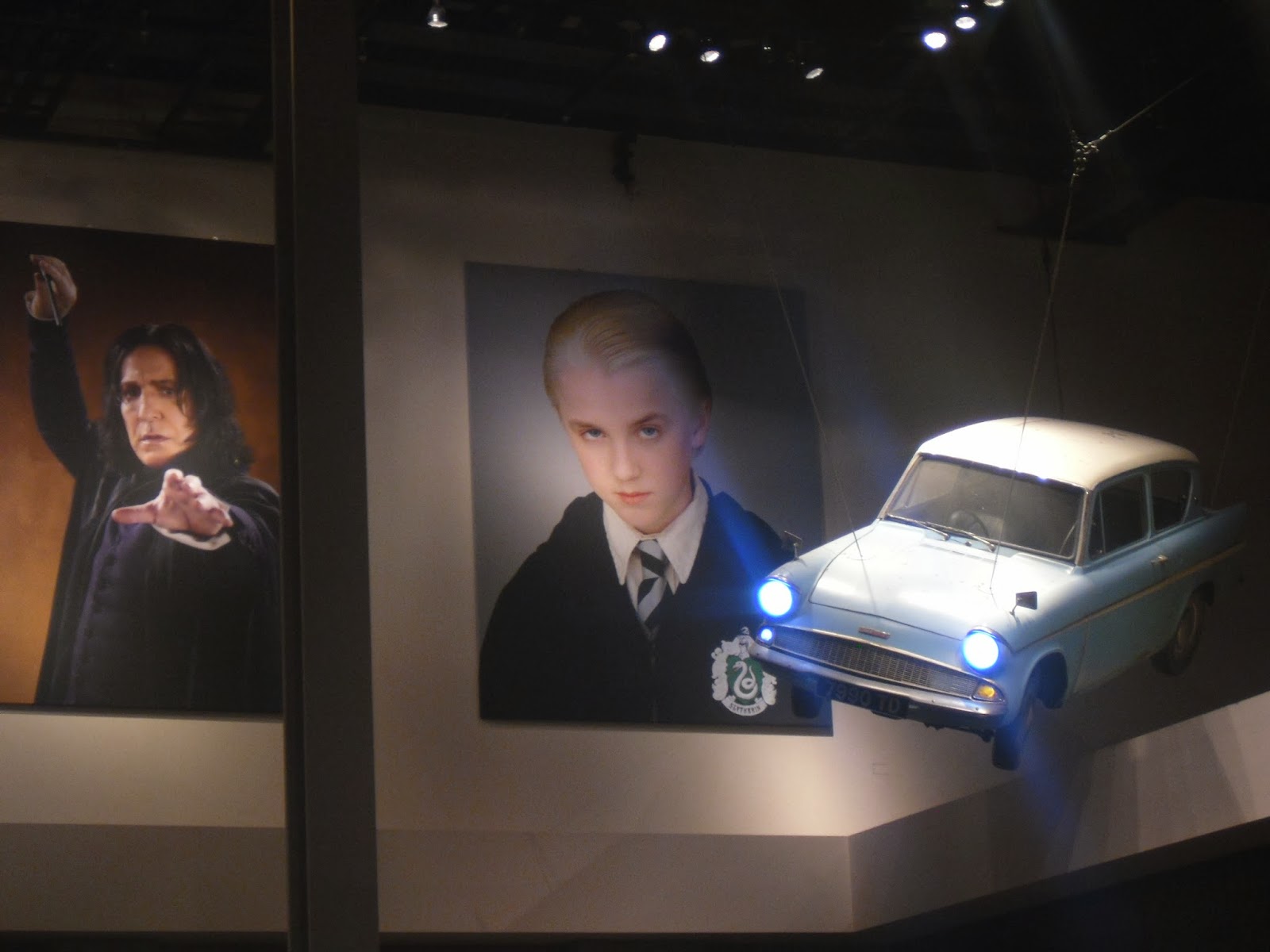 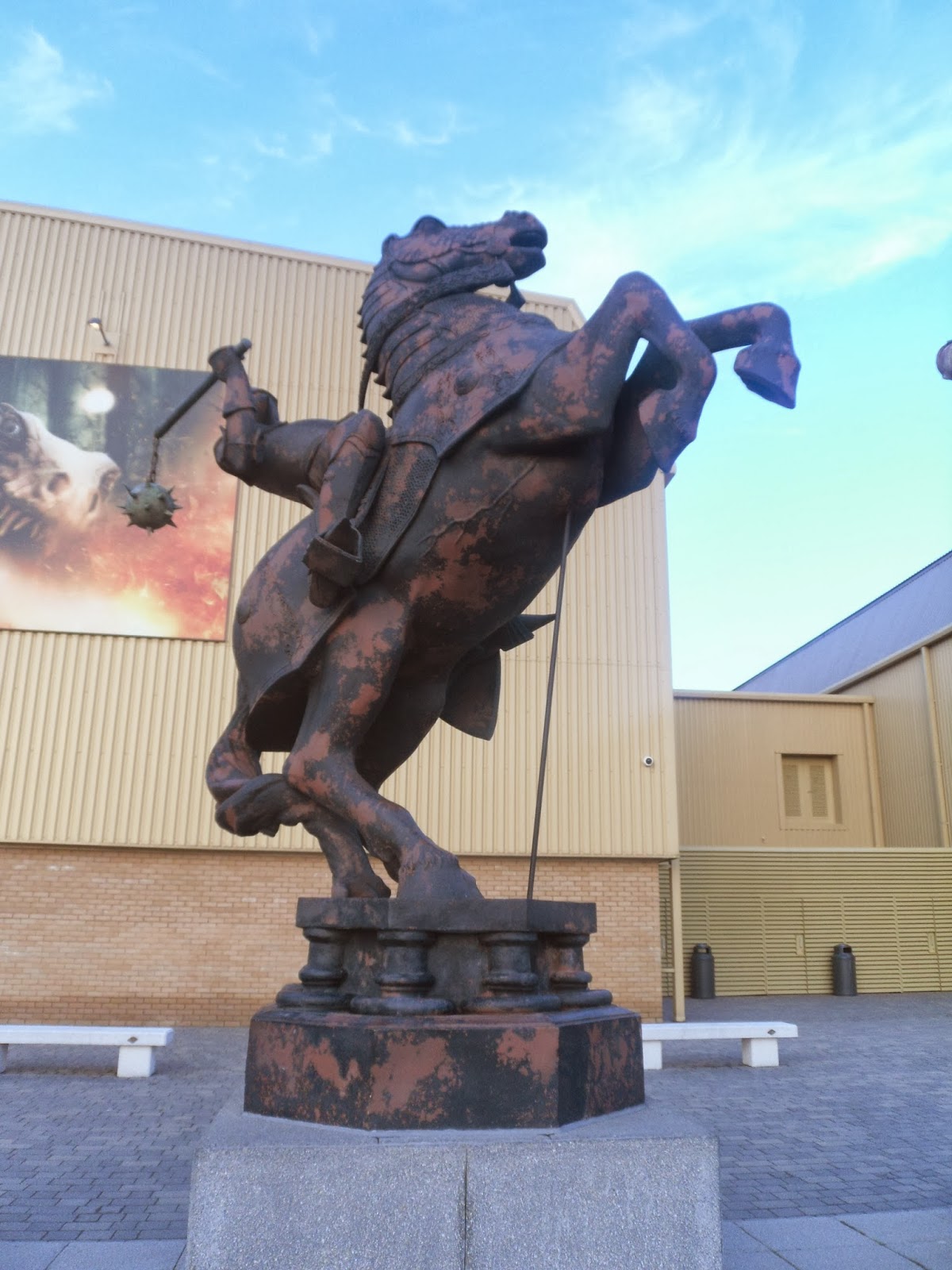 As we queued, I peered curiously into Harry's cupboard under the stairs and we chatted animately about the series. It's always lovely feeding off the passion of a friend. We jokingly re-enact scenes, unravel mysteries and discuss conspiracies based on the series. We're led into an enclosed room. We watch a brief introductory video and the walls suddenly split, revealing a chiselled, house sized door.

As a crowd, we gradually  filtered into the Great Hall. The high ceiling gave off a majestic impression that I typically associated with Hogwarts Castle. The long wooden house tables stretched down the room, encompassing various props such as candle holders, rusted crockery and mannequins proudly displaying the house uniforms of Gryffindor, Hufflepuff, Ravenclaw and Slytherin. I took in all the sights with glee, delving into seeing the physicality of objects that I’d only seen before in my mind’s eye and in films. 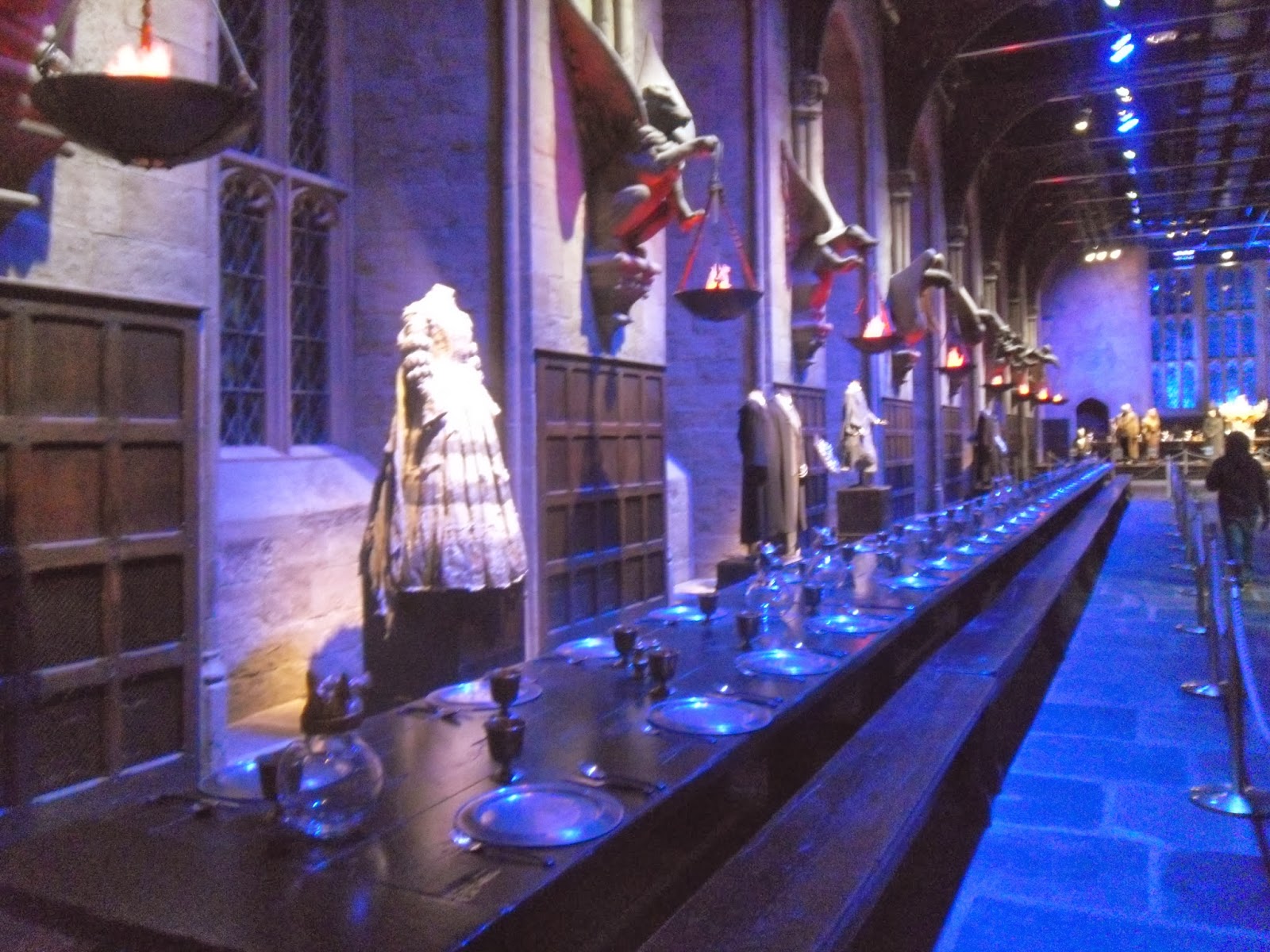 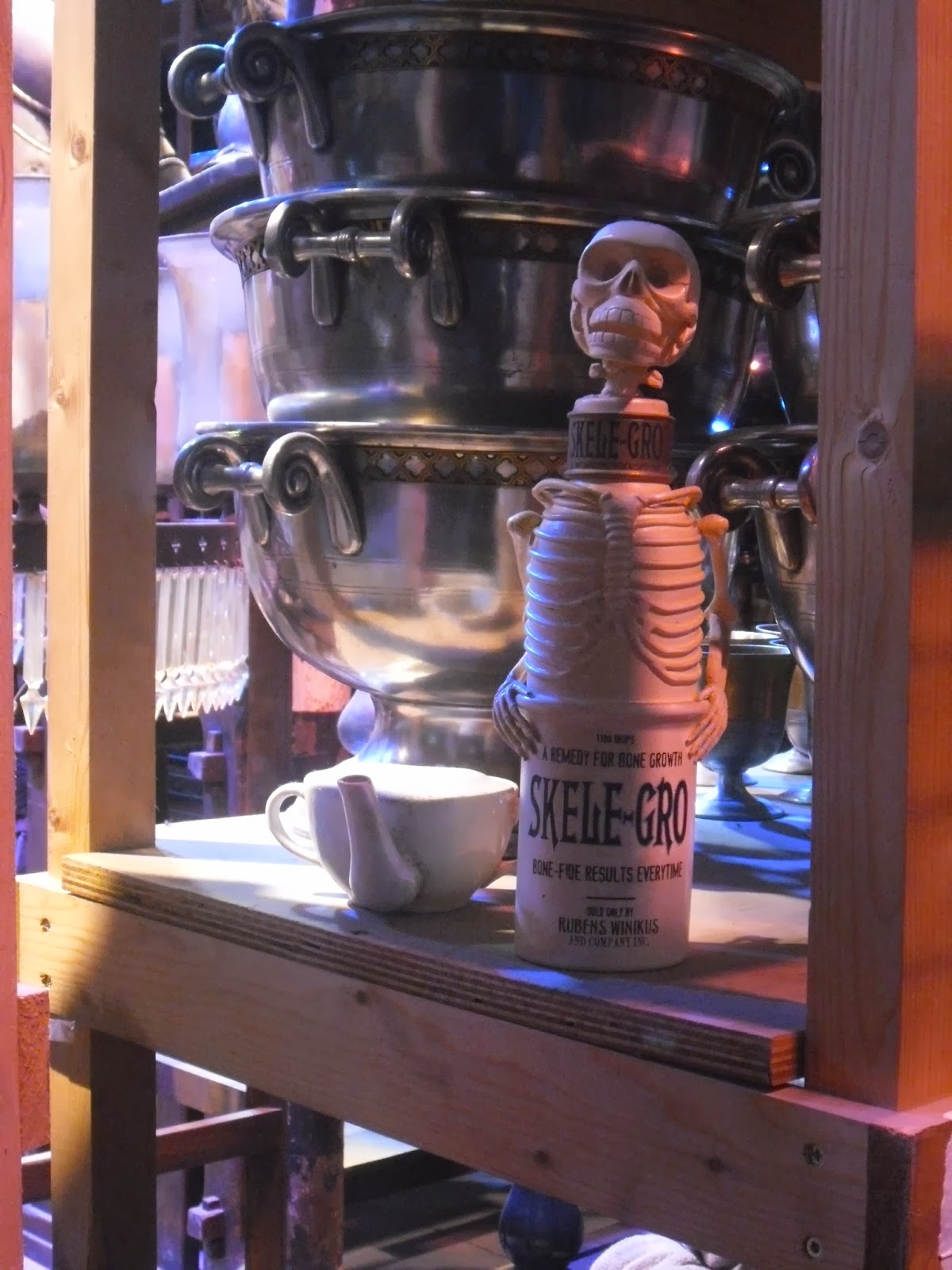 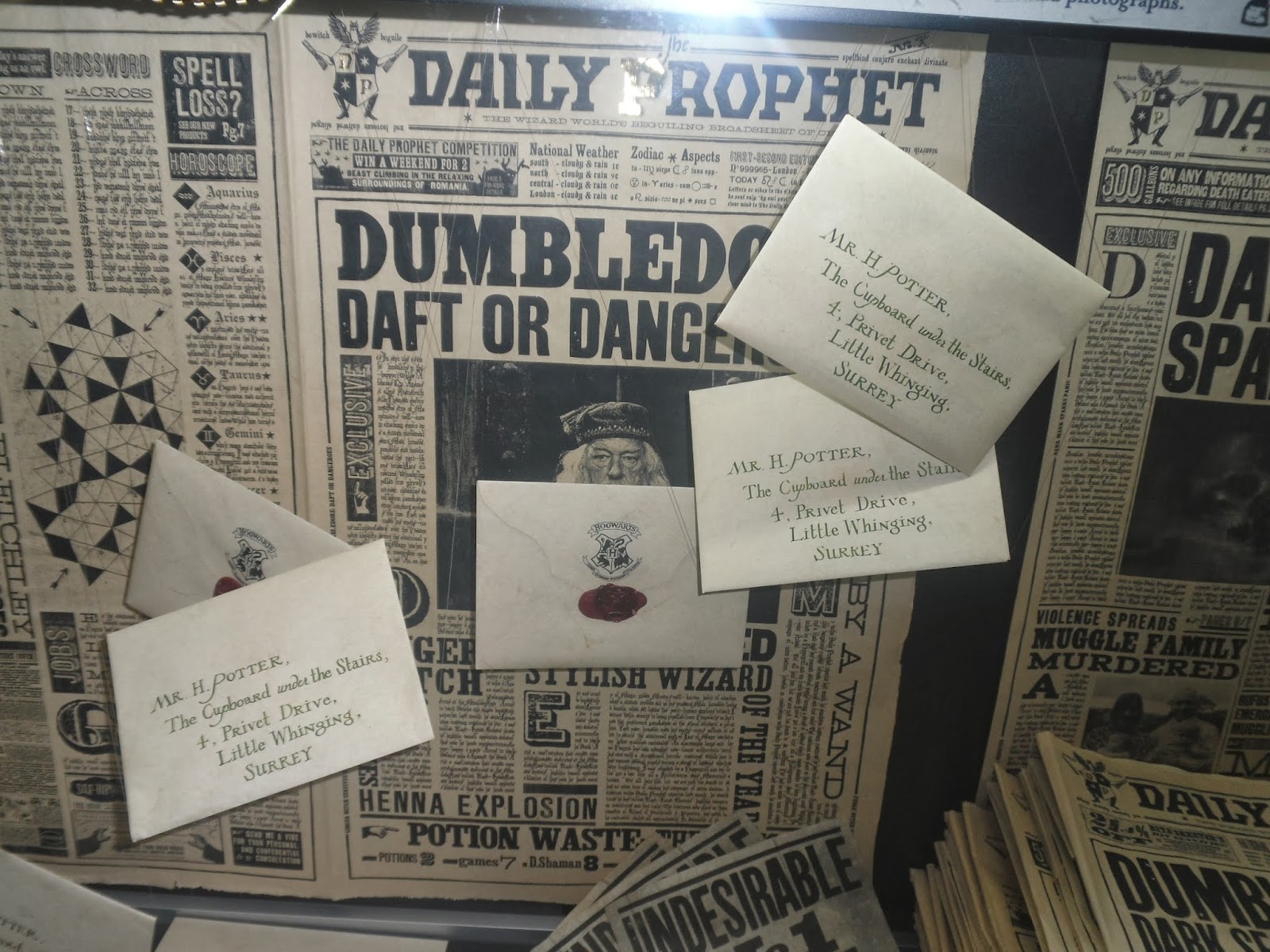 After the Great Hall, the studio tour exhibited an array of sets such as The Burrow, the Gryffindor Common Room and a potions classroom. Glass-fronted cabinets displayed the first hand props used within the film sets, from a bottle of Skelegrow to the welcome letter that was delivered to Harry for his first year at Hogwarts.
We walked through the life sized set of Diagon Alley, treading upon cobbled stone and peering into the magical window displays selling broomsticks and potion ingredients. There was a court-yard within the tour, where the Knight Bus was parked ironically on Privet Drive, next to the Dursley’s suburban home set. Marisa and I sampled a glass of butterbeer each. The liquid was deep mahogany in colour and topped with a light foam. It was similar to drinking a liquid form of Werther's Originals. 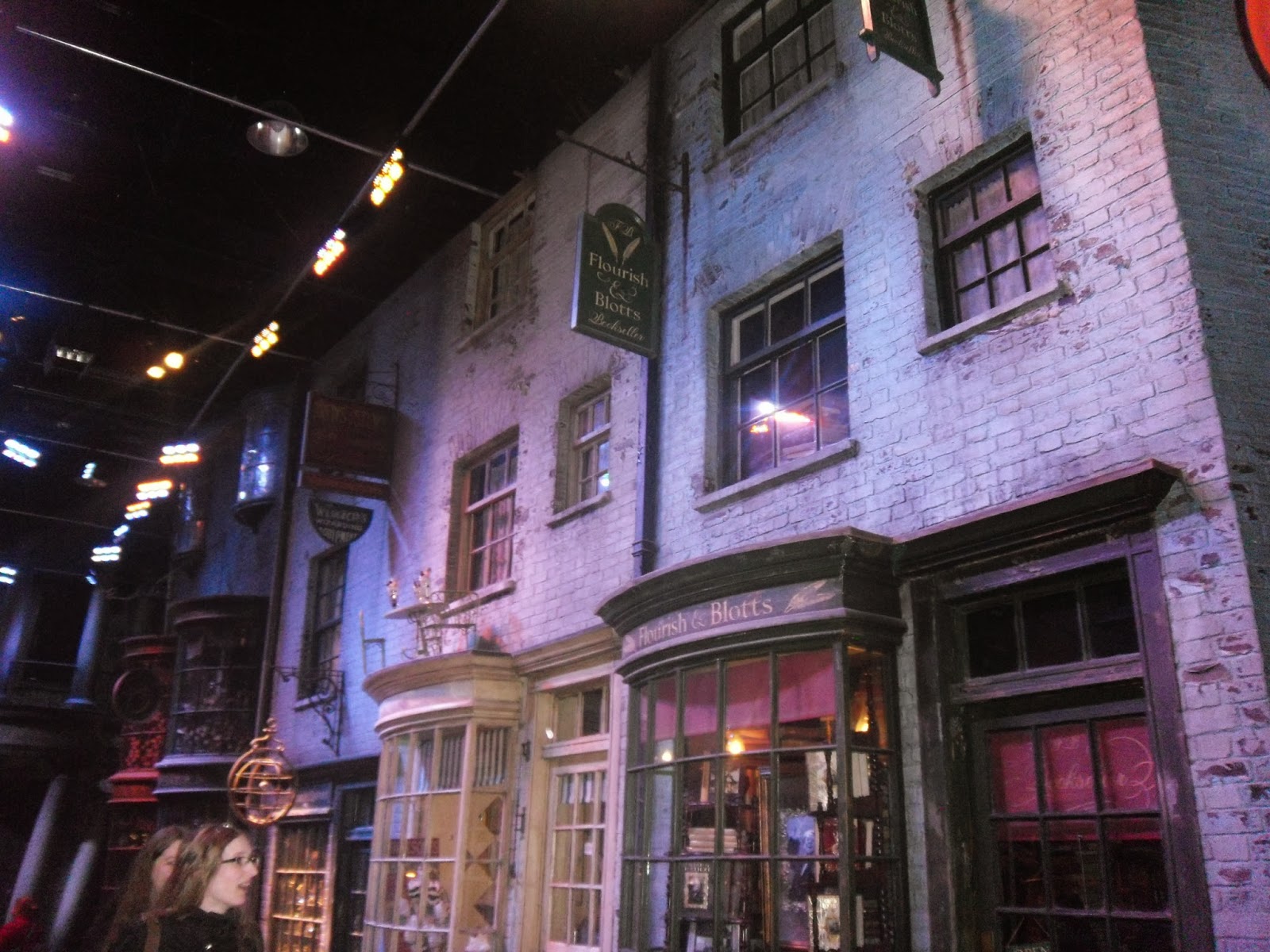 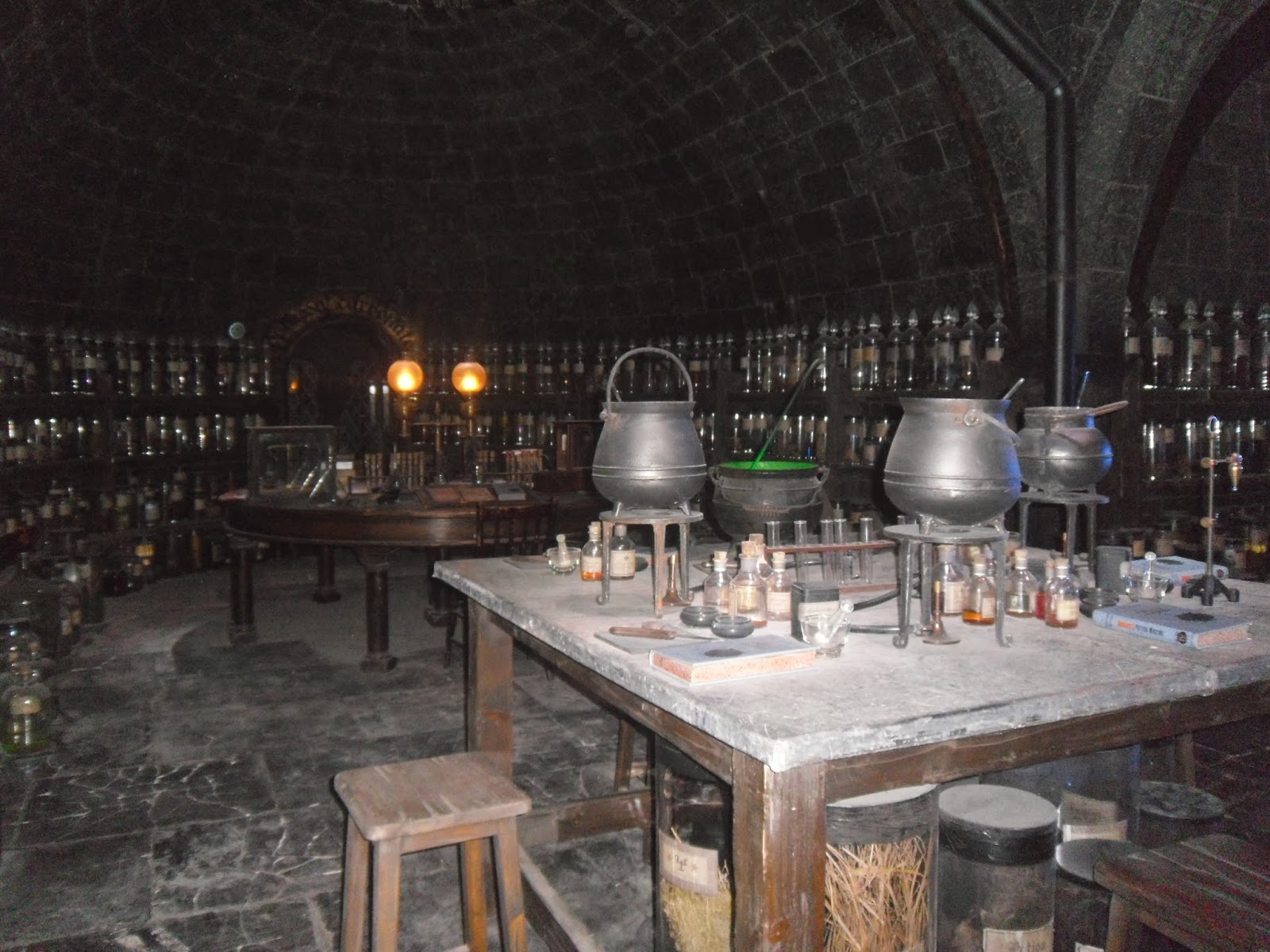 The most breath-taking sight of the tour was the scale model of Hogwarts Castle. We marvelled at the impeccable eye to detail, looking out at the little sites such as Hagrid’s Hut, the Herbology green houses, the Quidditch pitch and the Dark Forest. At the end of the tour, we finished in a room filled with wands, where Marisa and I were lucky enough to witness a marriage proposal from a couple on the tour.

I’m in the cinema. There is a roar of black smoke and the death eaters shoot across London inciting chaos, smashing windows and advocating fear. They crash through a narrow alleyway, revealing the hidden world of Diagon Alley, a magical world a mere stone throw away from the bustling muggle tube station of Leicester Square.
There are many Harry Potter tour companies out there. You are told about background trivia and you are taken to different film locations shot across the city.
However, with a little research, my friend and I unearthed a 19 page self-guided, Harry Potter walking tour guide. What café does Hermione go to before they are attacked? Where is the ‘real life’ Honeydukes in London? Where is the entrance to the Ministry of Magic? All of these questions and more are covered in the booklet. 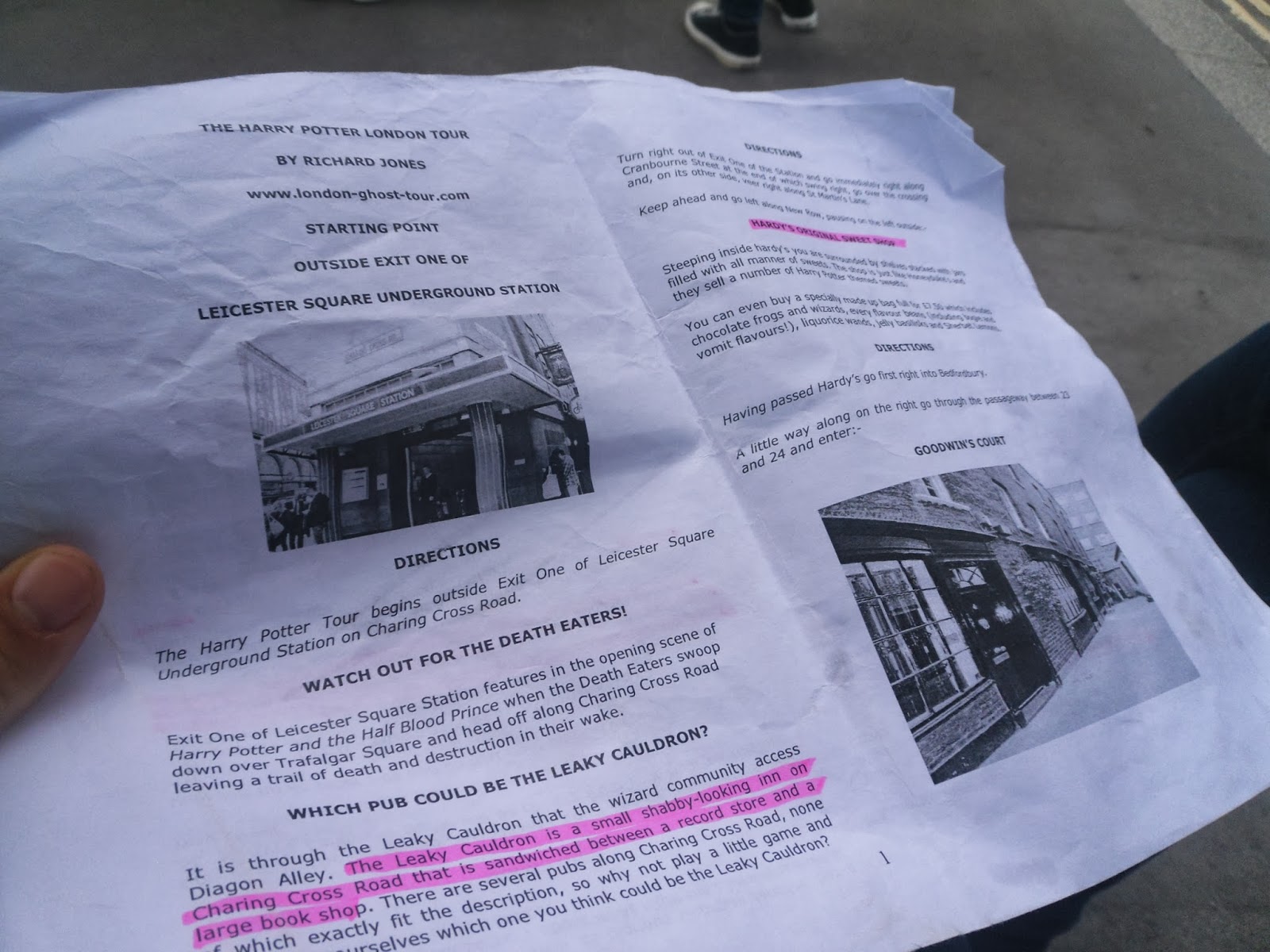 We meet up together on a Spring morning, outside Leicester Sq tube station with the self-guided tour information booklet at hand.  A few minutes walk away, we find a street tucked away from the main road with a mysterious quality to it. We’re led to a shop front with Harry Potter currency on display. There is a bookshop with a magical aura, and a swinging sign I would’ve never noticed conventionally saying “Witch’s Ball”.


I’m a Londoner and I am guilty of travelling in lines. Confined to tube routes. Intent on a single destination, whether it be a restaurant or my university. I often forget that is a wonderful metropolis, a marbled space rooted in history and reformed to fit the modernist lifestyle. The walking tour led me to areas of London I’d never considered visiting, from Leadenhall Market (The Leaky Caldron) to Hardy's Sweet Shop (Honeydukes). 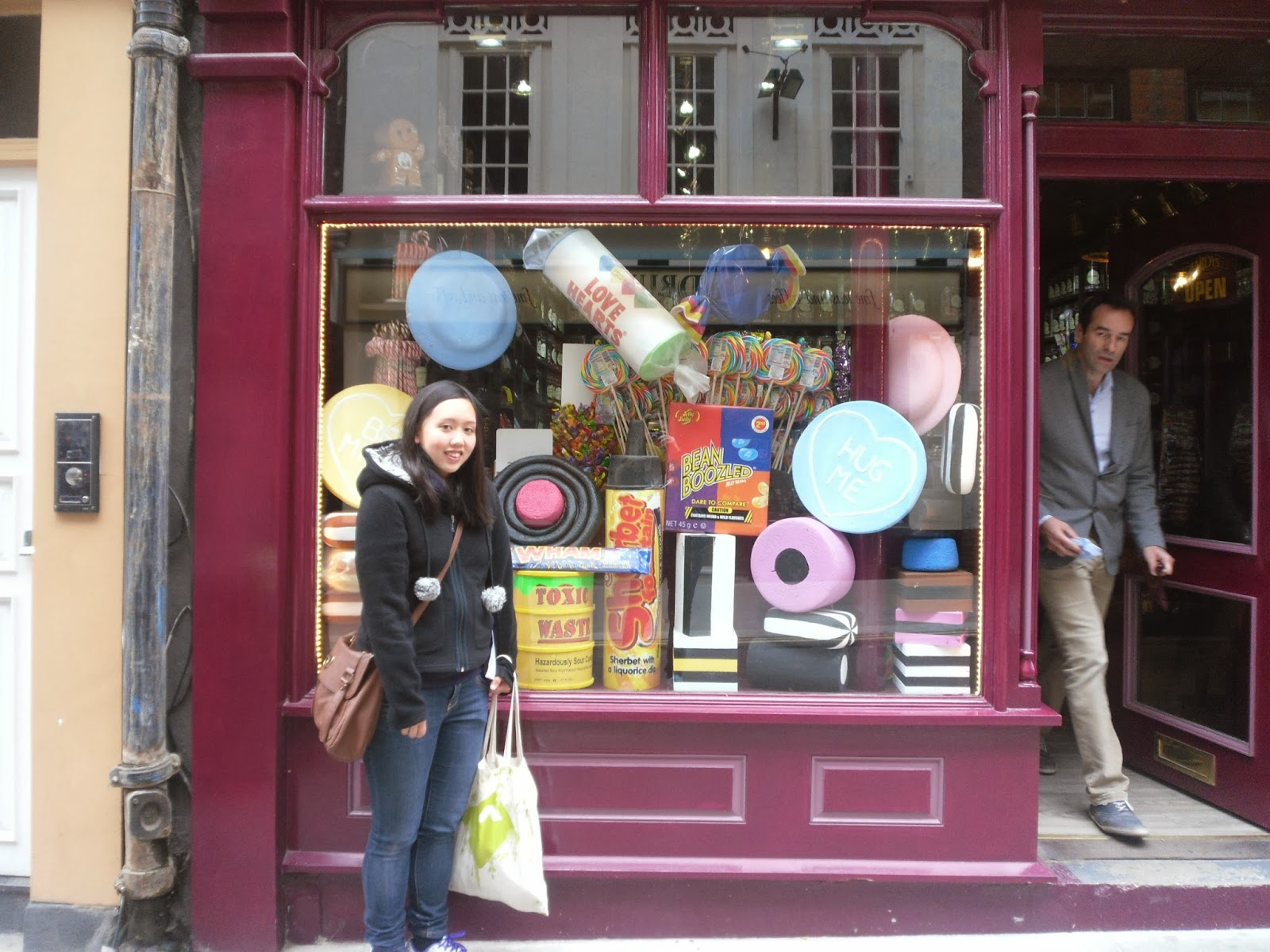 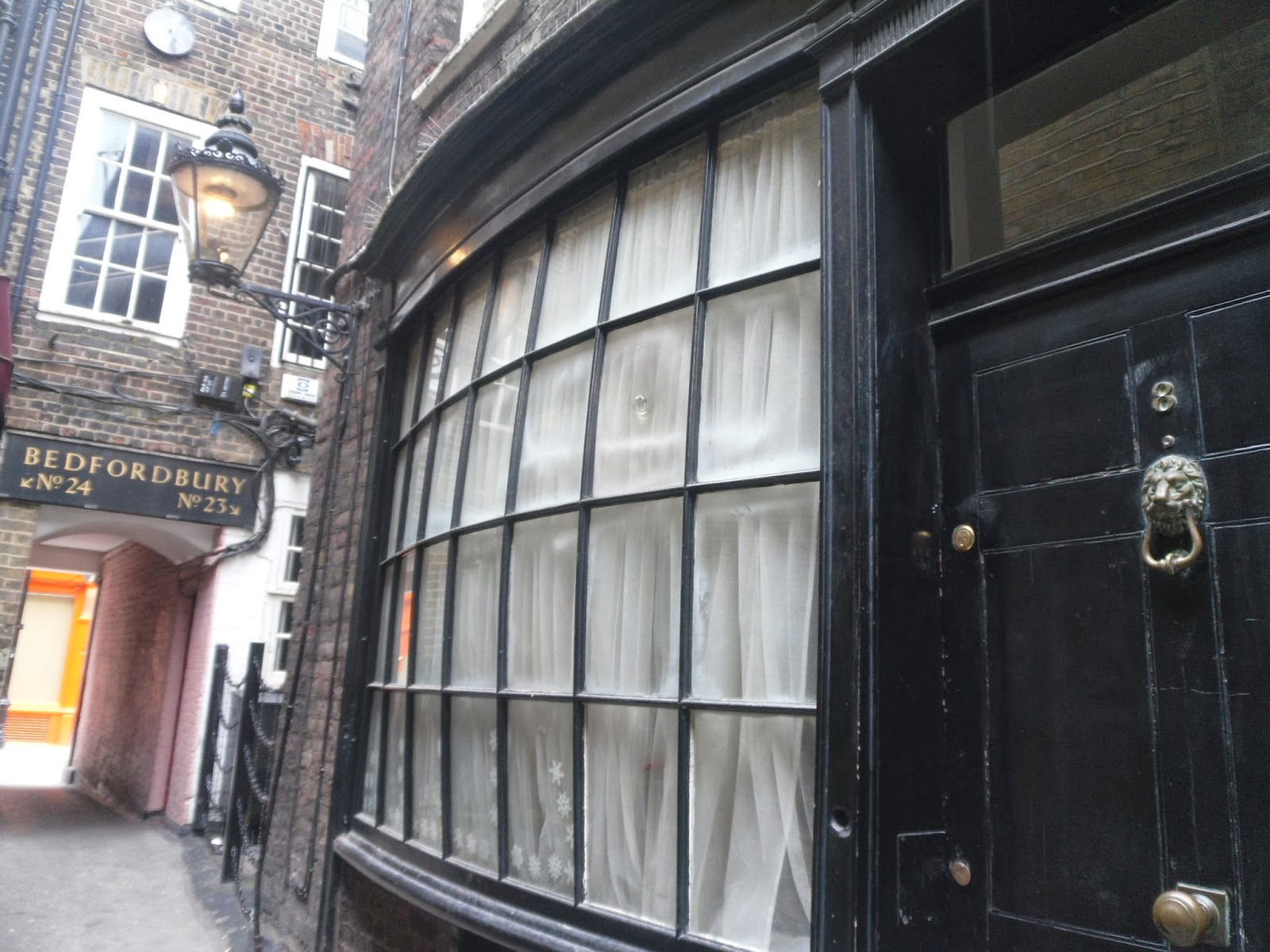 Throughout the day, we bumped into three different tour groups. I valued that Marisa and I were doing the same tour yet with utter freedom and at no cost to us. 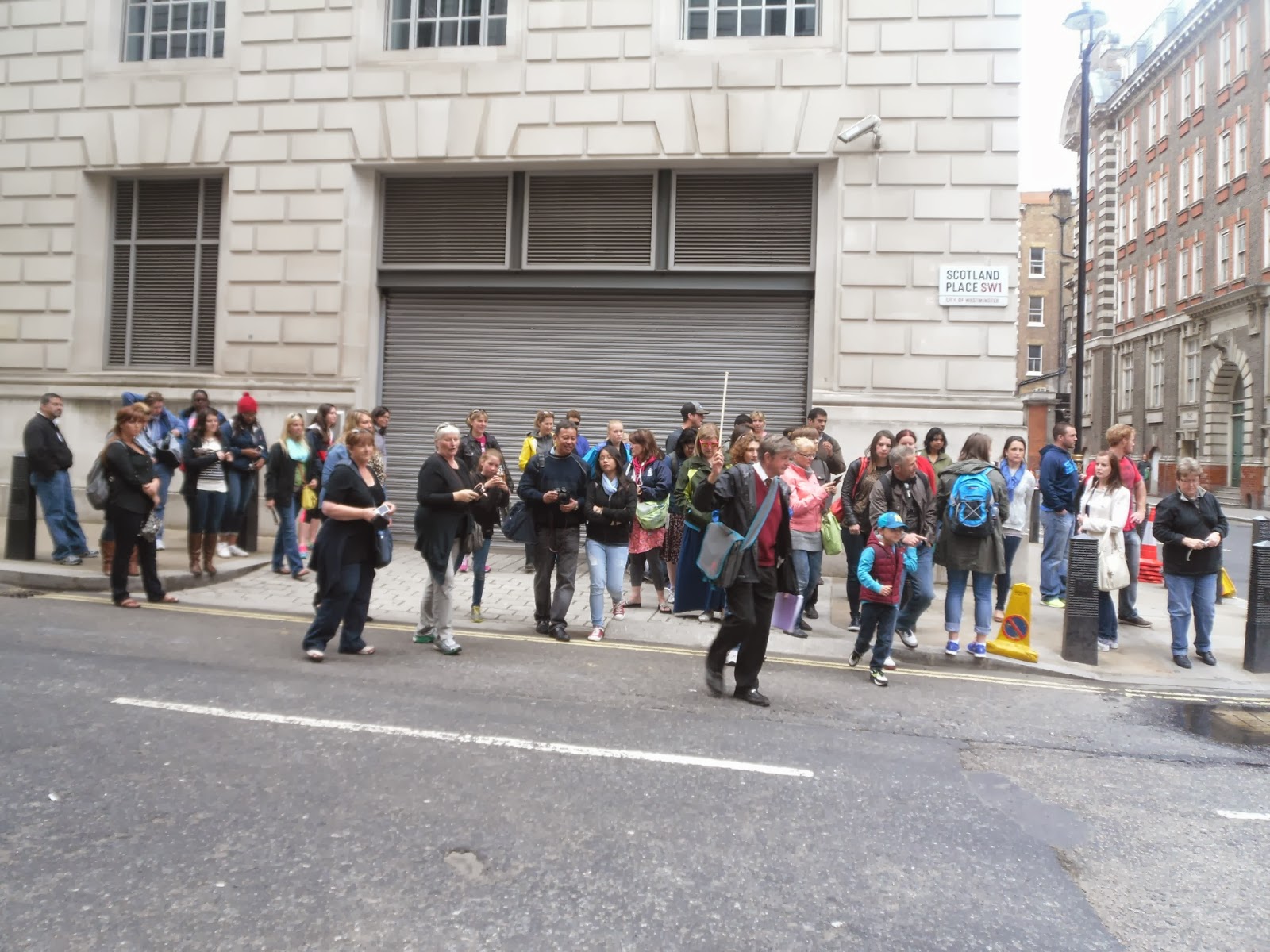 We both felt more attuned to spotting sights that implicated magic in the city. We saw a knight bus imposter as we wandered around London bridge and we tried in vain to gain access to the Ministry of Magic. Overall, it was a refreshing and curious way of seeing London, guided by a booklet that took us to areas that we never thought of visiting. 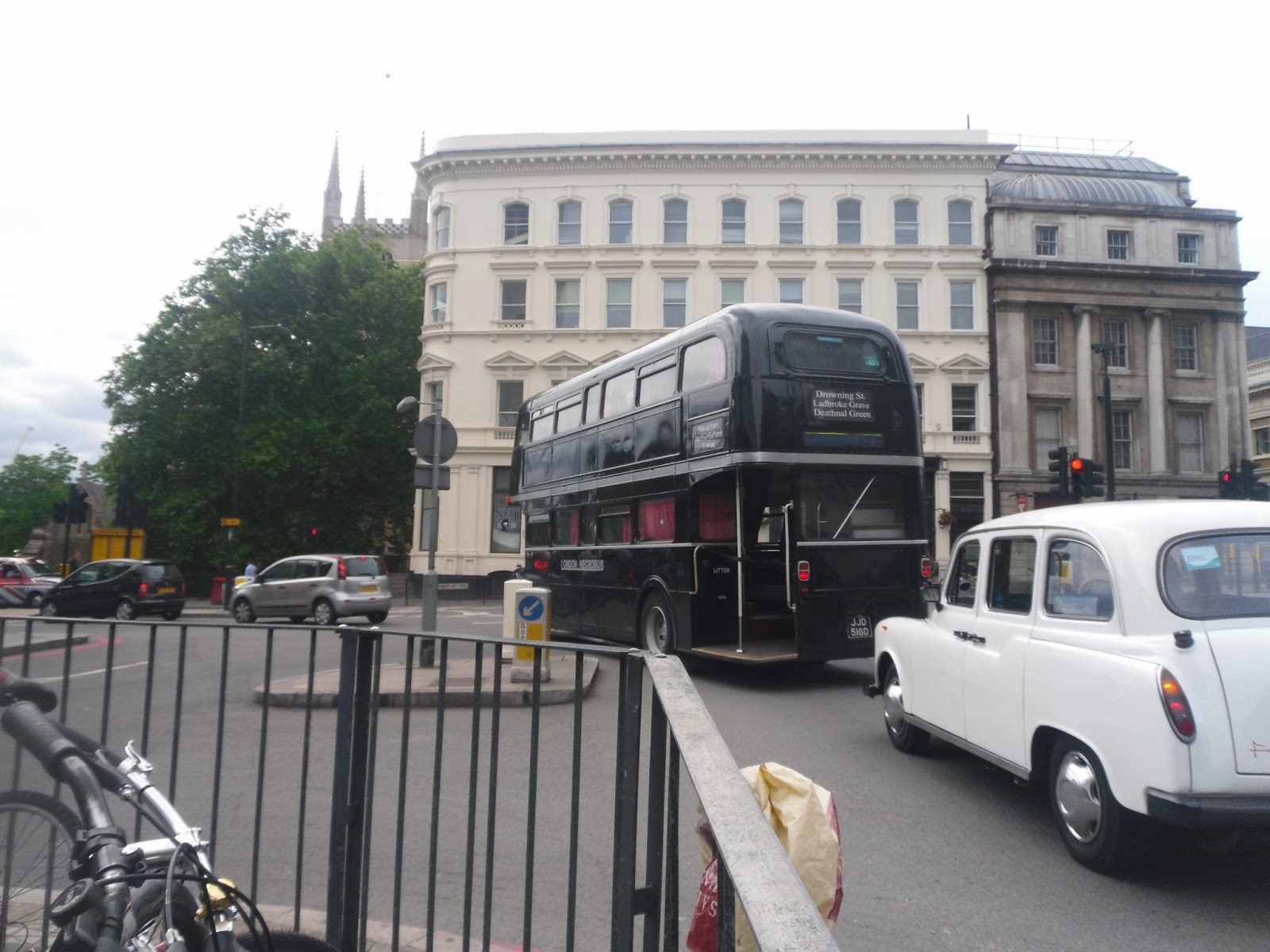 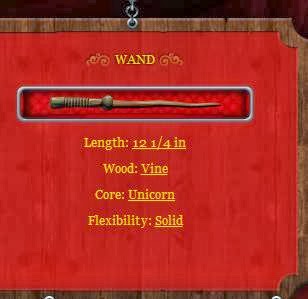 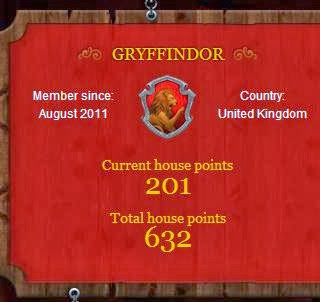