$125 (£80.00) for:
7:00am was the pick up time for white water rafting at Backpackers hostel, in Kampala. The night before, I met 2 Canadian medical students also going on the trip with me. The choice was 'Mild', 'Wild' or 'Extreme'? We agreed on Extreme of course!

We trundled through the morning traffic in Kampala, stopping at various hostels including Red Chilli which I had to move out of the night before because of a block booking.
Upon arrival in Jinja, we were greeted by an enthusiastic, topless guide. From here; helmets, life jackets and paddles were distributed, we were divided into groups and each assigned a guide.
Our group had 3 guys, 5 girls and Sadul as our lovely guide!

Breakfast consisted of sausages, battered whole eggs, bananas and bottles of water served in a 'grab and go' basis. After breakfast, we were led straight to the water to practice some safety drills and then commerced the most wildest and most exhilarating grade 3 - 5 white water rafting Uganda has to offer!

Morning Rafting
The morning session began with 5 rapids through an estimated 15km of river. We warmed up with rapids grade 3 - 5, finishing with the notorious 'Bad Place'.


We paddled for around half an hour down a calm stretch of river, awaiting the next rapid.

Me and the guys swam down a portion of the river, aided by our life jackets alongside the boat. The water temperature was perfect and the backdrop was incredible. We floated past beautiful landscape, with different species of birds everywhere. There was a tree in the middle of the river where thousands of bats flew out from the branches....It is simple sights such as these which makes travelling so wonderful and free.

Five minutes after being pulled into the boat (it was very hard to pull yourself up from the water!), we saw a large snake glide past on the surface of the water. We felt fear and utmost relief. We were lucky that we didn't encounter it when we were swimming!

We approached the 'Itanda' and the 'Bad Place'. From a distance, the rapid looked like a waterfall! The guide told us to paddle to the bank, as it was too dangerous to raft through the upper section, which was a grade 6 rapid.
We told him we were up for it, and he dismissed immediately, merely stating that "we could die". (To this day I am unsure if he was serious or not).

Our raft was lifted up by the porters, we clambered back and then came The Bad Place......


I cannot completely recall what happened, other then utter mayhem! We rafted hard, straight into 'giant hole' that is the Bad Place. I don't know if we capsized, or if I was just dragged out by the force of the rapids.

The more you struggle, the deeper the rapid claims you. I fell into blind panic as I was caught in the undertow of the water, swallowing more of the Nile water then I'd ever want to. The paddle was torn from my hands. I'd bob up temporarily for a gasp of breath, only to be dragged under the water again by the rapids. I can only describe it as a 'washing machine' effect, you are being pulled and pushed by the water with completely no control of where you want to go.
There was a moment where I thought I would drown, until I felt a yank on the scuff of my life jacket. A rescue kayaker pulled me out of the rapid and told me to hold tightly onto his boat. 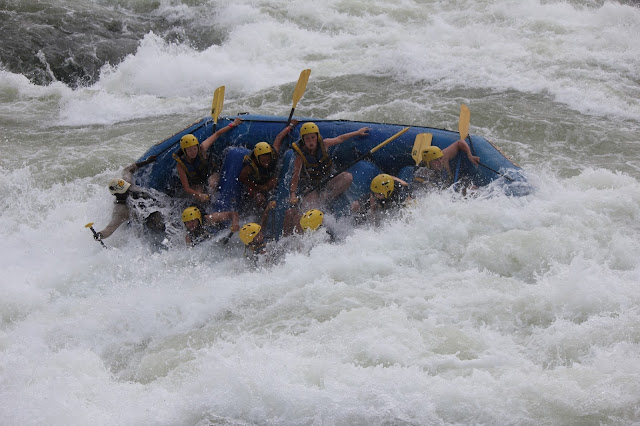 He navigated his way across the rapids to calmer water. He asked me if I was OK and pointed out that I had a nosebleed. It was then I remembered that in the midst of chaos, I was headbutted by a helmet when the water threw us all out.
Our guide later informed us that we rafted straight into the most powerful rapids of The Bad Place, with half the boat falling out on the first wave and everyone else falling out on the second.

Afternoon rafting
The 5 girls left in the afternoon, having only booked the half day rafting. One of the Canadian students left for the bungee jump, leaving our group with just me, Matt, Will & our guide, Sadul.
We moved into a smaller boat with just the 4 of us. Less weight in the boat = higher likelihood of capsizing!! The afternoon session consisted of 4 rapids grade 4 - 5 and around 10km of river. We capsized on around half of the rapids, with our boat becoming nothing more then a toy within the currents.
One of the rapids was 'vortex' like, plunging the rafter deep in the water  that is perhaps 5 - 10 seconds in reality, but what feels like a complete eternity underwater.
With less people, Sadul was more lenient and he let us surf the rapids and even tackle some of them twice! There was no fear, only thrill. We were happy to capsize, merely enjoying the added adrenaline rush of being inside the rapids.

With the day drawing to an end, we finished with a BBQ, a transfer to the Jinja campsite and the memories of an experience of a life-time.
White Water rafting was terrifying, intensive and an exciting thrill that I cannot wait to do again!

http://adrift.ug/adventures/white-water-rafting/guide-to-the-rapids/
(Guide to the Rapids & link to Adrift)