Getting up to mischief, as usual.

The Short Story
Here it is in a nut shell: Rock-o-nore, went climbing on a extremely erosive cliff, got reported by a member of public and rescued by the coast guard search and rescue team very near the top.

I don't really know why I'm blogging this really, it's a secret, I'm not telling my parents. I don't want the lecture: condemning my actions, you are careless, you're a girl so you have to be careful (Asian mentality).
This is just for a means of remembering it and definitely in the list of some of the crazy yet exhilarating things I've done.

The Full Story
Me and my sister have planned for ages to go to the beach together! We looked up the low tide tables for Hastings and walked to Rock-o-Nore, arriving about 10:00am to an absolutely beautiful beach setting. 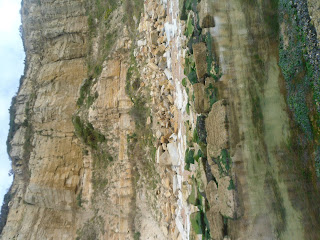 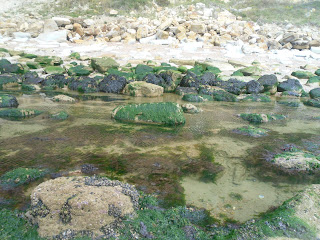 We ignored the warning sign of course, hence the first move that gets the ball rolling for our crazy little adventure....


I saw the cliff. It looked easy from the bottom. The mere sight reawakened my inner stirrings for adventure and adrenaline! The thought of scaling all the way from the beach, up to the East Hill Country Park, woaah! Hence I announce the idea and we clamber up a few metres. It was easy and felt a little dangerous. Just a brilliant thrill so we continued. We learnt from the first few metres that the rock was extremely erosive, basically comparable to crushing a sandy stone in your hand. Did we turn back? naah!

As we got higher, the crazy lingering fear increased, my legs started shaking and cliff inclined incredibly sharply to the point where it was not possible to stand on two feet securely, requiring four points of contact (hands and feet). 30% of the way up, we came across a extremely hard bit to climb. Literally requiring brute strength (pulling up body weight on extremely crappy crumbly handholds), a bit of sheer luck and a lot of sisterly encouragement. We surpassed this bit, then it kicked in: there was no turning back. There was no way in hell I would be able to get down safely.

A crumbled rock (tennis ball size) fell on my arm during this. Not hard enough to do damage but enough to scare the wits out of me. I was just lucky it wasn't my head! :). We hear a shout. There's a man and his son down on the rocky beach, warning us that it was very dangerous. We tell him we're ok and continue upwards.


50% high. A dog walker stands watching us, probably thinking 'stupid teenagers'. The most difficult part of the climb here. I managed to give my sister a boost up using my hands positioned on my shoulder for support, then it was my turn, I had no boost :P. Just a single foothold and nothing to grasp my hands on. I literally went through every emotion here: frustration, anger, fear, determination, enthusiasm etc etc! I admit it. It took me at least twenty minutes to get past this mere bit. I just couldn't do it. Everything I tried to hold onto crumbled in my fingers and there were no plants to grab like earlier on. My sister couldn't reach me to pull me up, merely risking herself if I pulled too hard and if she leant over too far.
Tah dah!! The brain wave, I took off my red hooded jacket, we doubled it over to prevent ripping and I handed her one end. A count in, a massive exertion in effort and WOO. I crawl up in a very undignified manner, lightly scraping my arms but we're here! Past the most horrible bit of the climb.

Here, the cliff gets extremely, extremely steep. We sit down, and literally slide our way up, using our bums as the 'anchor' and our feet and hands for moving and stability. We hear another shout. There's two people in blue overalls, helmets and with binoculars. We're too far up to hear what they're shouting, so we merely give the 'OK' hand signal and continue onwards. My first reaction: annoyance. We don't need help. We're nearly there. I wonder who called them etc etc.

WE'RE HERE!!! THE TOP. or not. I was deceived. We crawled through the small trees and plant growth at the top and find a small tent and fire! There is a homely flower decoration stuck in the tree and old coffee pots on a 'log' table. The site looks very, very recent. I still wonder to this day how the person got there and how they managed to bring camping things to this location.

We continue upwards, not so much on a cliff anymore, just a very very steep/slippery fine stoney hill. There are a lot of plants and we realise the way forward is blocked up by prickly plants and thorny blackberry bushes. We're so near the East Hill! There's plants!!! We shuffle along the extremely steep hill. It is stoney other then the odd growth of horrible spikey plants that put tiny splinters in your hands when you touch them.

We reach the clearing I was aiming for, and see a 30 ft crumbly cliff-face. I knew East Hill was here. Then there's a shout. There's a man in blue overalls and a helmet. He asks if we're ok and to sit down somewhere safely and that his team are here. I do what he says, thinking garrgghhh!!! How did you find us all the way here. I was so near the top and wanted to scale it without help.

We wait for about half an hour. I check the time and realise there is no phone signal here. My bellys rumbling because I left home without breakfast. The guy is setting up some kind of tripod and a lot of ropes.
As he abseils down, we watch and the cliff crumbles everywhere, He tells us quickly to turn around to duck our heads to protect from falling debris. He's talking on his radio again, referring to me and my sister as "the two casualties". Heheheh. We weren't hurt or anything.

He reaches us, says he's glad to find us unscathed. He attaches a harness on me and a million ropes and hands me a pair of goggles and helmet to wear. Jeez, safety or what?
We begin to abseil up, while my sister waits. Then it dawns to me, there was absolutely, no way up. No foot holds/grabs. Just nothing but a 30ft crumbly cliff face. I realise then that me and my sister would've been stuck here and I'm up suddenly really grateful that they followed us here. I mumble my thanks to him, a little embarrassed of this whole search and rescue thing.

I clamper over the top, the ropes quite taunt. I notice a digital camera filming. Grr I wish they didn't take photos/film this. Then I realise, WTF?! There's a team of eight of them looking for two of us! I immediately feel really shy, one of the guys ask if I'm ok then tells me to sit in the corner. I watch them work as a team, bringing up my sister.

I make conversation, asking one guy how they found us. (East Hill is MASSIVE). He said with difficulty, and said they sent out a lifeboat to help work out our location on the cliff when the undergrowth covered us from view at the bottom. There's one lady amongst the guys, and she asks why we 'ran away' from them midway up the cliff. We didn't run away! I told her I thought we were very nearly at the top and were unable to come down anyway.

I see my sister come up and the guy asks me to write down both our names, addresses and age. We walked through the undergrowth/blackberry bushes that looked very recently hacked at and they drove us back home  in their coastguard jeep thing.

Email ThisBlogThis!Share to TwitterShare to FacebookShare to Pinterest
Labels: Adrenaline